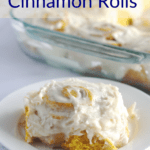 The pumpkin is in the yeasted dough and the cinnamon swirl is elevated for fall with the tastes of warm pumpkin spice.

You can even make these the day before and bake them the next morning (which is what I prefer to do). Or, if you can't wait, bake them the same day!

Melt butter and milk together in the microwave. Pour it into a large mixing bowl with yeast. Add pumpkin puree, brown sugar, cinnamon, nutmeg, and salt. Mix to combine. Mix in the egg, and then 1 cup of flour. After the 1 cup of flour is mixed in, knead in the remaining flour.

Place the dough in a greased bowl, and cover until it has doubled in size. When ready, roll it out on a floured surface.

Combine butter, brown sugar, and the spices in a small bowl. Spread softened butter all over the rolled out dough. Sprinkle the filling all over the butter. Pat it down so it sticks to the butter. Roll the dough from the longest side. Cut 12 slices into the dough to make rolls. Place the rolls in a greased baking dish, leaving spaces so they can rise.

If you would like to make the cinnamon rolls the same day, cover and let the rolls rise until double in size. Preheat the oven to 350°F. Uncover and bake the rolls at 350°F for 22-28 minutes, or until their temperature is 190°F. If they brown too much while baking, cover with aluminum foil.

What I do, is warm an oven up. Turn on your oven to 350°F and let it start to preheat for a few minutes. Turn the oven off. It will feel warm inside the oven, not hot. Place the cinnamon roll in the oven and close the door. The cinnamon rolls will warm to room temperature and double in size much faster.

When the cinnamon rolls have doubled in size, take the plastic wrap off and bake at 350°F for 22-28 minutes, or until their temperature is 190°F. If they brown too much while baking, cover with aluminum foil.

Can I freeze these?

For any leftovers, wrap each roll in plastic wrap and then put them in a freezer bag before putting them in the freezer. To thaw, grab a roll, unwrap it and microwave for 30-60 seconds until it is warm.

How do I slice cinnamon rolls?

You can use a serrated knife or plain unwaxed dental floss.

Can I make these in advance?

Yes, the cinnamon rolls can be made up to just before their second rise (when they are ready to rise in the baking pan). Cover and store in the refrigerator overnight. In the morning, bring the cinnamon rolls to room temperature and bake.

Is allspice a mixture of spices, like pumpkin spice?

No, allspice is a spice made from dried berries of an allspice tree.

All nutritional information provided on ninakneadstobake.com are intended for informational purposes only.

Did you try this recipe? Comment below to let me know :) Cancel reply