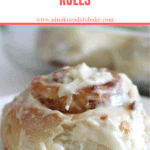 These cinnamon rolls are so soft and fluffy, and are topped with a rich cream cheese frosting. The only cinnamon roll recipe you will ever need!

Welcome to week 2 of Nina's Bread Month! So far we have made dinner rolls and reviewed how to bake with yeast. Cinnamon rolls are not very difficult to make and I thought this one would be a perfect, delicious recipe to try together.

These rolls are the most soft, fluffy, cinnamon-y cinnamon rolls I have ever tried! They have the best caramel-like filling from the brown sugar and cinnamon. So many recipes calls for granulated sugar in the filling, but brown sugar is miles better and creates that caramel-likeness. I also added pecan pieces to the filling on these as requested by my husband, but you could leave them out if you would prefer.

Tips for the best cinnamon rolls

If you try this recipe, please tag me on Instagram #ninakneadstobake. I would love to see your cinnamon rolls!