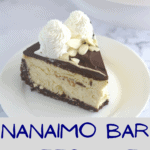 Nanaimo bar cheesecake is a combination of nanaimo bars and creamy cheesecake. It is made up of a chocolate almond crust, vanilla custard cheesecake, and a chocolate ganache.

The filling had to be a mix of cheesecake and the filling of a nanaimo bar. I decided to add a bit of vanilla custard powder to the cheesecake filling, and it worked so well. A nanaimo bar's topping is chocolate ganache layer, so of course this cheesecake had to incorporate that. To decorate, I piped some sweetened whipping cream and scattered sliced almonds on top.

What is a nanaimo bar?

A nanaimo bar is a no-bake dessert bar that is named after Nanaimo, British Columbia, Canada, where it became popular. It is made of 3 layers - a graham cracker and shredded coconut base, a custard flavoured icing in the middle, and a layer of chocolate ganache on top.

How to make cheesecake

Make the crust by mixing the graham cracker crumbs, almonds, coconut flakes, cocoa powder, and brown sugar. Stir in the melted butter and then pour it into a 9-inch springform pan that is greased and lined. Press the crust mixture into the bottom and up the sides of the pan and then bake it.

While the crust is cooling, make the cheesecake filling. Mix the cream cheese and sugar together until it is smooth. Add in the flour and sour cream. Mix in eggs, one at a time, and then mix in vanilla extract and custard powder. Pour the cheesecake batter into the springform pan.

Make the whipped cream by whipping the heavy whipping cream with powdered sugar and vanilla extract until stiff peaks.

Decorate the top of the cheesecake by piping on the sweetened whipped cream. Scatter almond slices on top.

Cooling a cheesecake without it cracking

Don't open the oven until the cheesecake has done being baked. I know it's tempting, but don't do it. Opening the oven drastically changes the temperature of the oven and can make the cheesecake sink or crack. Wait until it has done it's baking time and then you can open the door. The center of the cheesecake should still be jiggly. Then turn off the oven.

After the cheesecake has cooled in the turned off oven, let it sit on your counter for another 20 minutes. Run a knife around the insides of the springform pan to loosen the crust from the sides. As the cheesecake cools, it can shrink. By loosening the sides, the crust can contract with the filling as needed.

Do I need to use a water bath?

I highly recommend it. Using a water bath helps the cheesecake bake more evenly and it helps against cracks.

How do I store cheesecake?

Store the cheesecake in the refrigerator for up to 5 days.

Can this be made ahead?

You can bake the cheesecake and let it sit in the refrigerator overnight. Continue with the chocolate ganache and decorating the next day.

Can cheesecake be frozen?

You can freeze the cheesecake after it has been baked and cooled and without the chocolate ganache or whipping cream. Wrap the cheesecake with plastic wrap and then foil. Freeze for no longer then 1 month for best flavour. Thaw in the fridge or at room temperature. After it has thawed, decorate and store in the refrigerator. 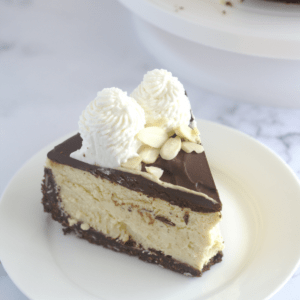